Design and Deployment of an IoT Application-Oriented Testbed describes the challenges and design choices encountered in architecting and deploying an IoT testbed for Web of Things applications. Interoperability through support for a full IP-based protocol stack, security issues, and Human-Things interactions are analyzed and described.

In Wearable Computing for the Internet of Things, the role of wearables in the IoT era is analyzed. A novel interaction model for interaction with smart environments through the use of wearable devices is described together with an Android based Web of Things application based on Android. 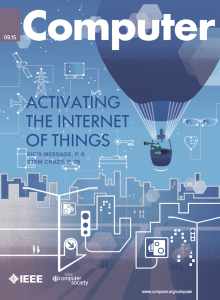 Design and Deployment of an IoT Application-Oriented Testbed

The global reach and extreme heterogeneity of the Internet of Things present major application development challenges. Using the same Web-based approach underlying the Internet’s evolution into the IoT, the Web of Things Testbed provides a stable, open, dynamic, and secure infrastructure to simplify application design and testing.

Wearable Computing for the Internet of Things

In the next few years, the Internet of Things (IoT) will become a reality, merging the social, physical, and cyber worlds to enable new applications and forms of interaction between humans and connected, smart sensing and actuating devices. As billions of smart objects become deployed pervasively in the environment, users should be able to discover and interact with objects in their proximity in a seamless and transparent way. Although smartphones have become an extremely popular computing device, smart wearable devices, such as Google Glass and the Apple watch, are now providing even more effective means to bridge the gap between humans and smart objects. The authors analyze the characteristics of wearable applications for IoT scenarios and describe the interaction patterns that should occur between wearable or mobile devices and smart objects. The authors also present an implementation of a wearable-based Web of Things application used to evaluate the described interaction patterns in a smart environment, deployed within their department’s IoT testbed. 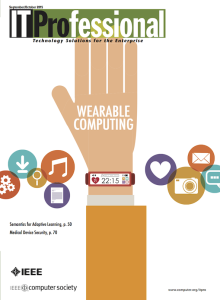